‘Verrat’ (betrayal) is my first serial work.
The title is giving my sculpture something to do in the show.
Let me introduce you to the threesome they’re called: ‘Immer nur Lächeln (The Sublimes)’.
That means just keep smiling. They might be a vicious vocal group.
The trio represents something very, very, very powerful.
Is the solo in the next room – ‘No No Nannette’, the loser or the intruder?
We look up to carved ornaments on baroque edifices – ornaments left to their own devices,
they speak down to us. Does this sculpture resemble you, us or THEM?
‘C’ stands for claustrophobia. Sculptures look at themselves in collage mirrors.
Drawings draw you and lines cut space.
There are backdrop pieces with metal indications forming rooms within rooms, abstractly.
But what does abstraction mean to you? It doesn’t mean anything to me, or not much …
‘There is no abstraction’, she said.
Objects become. We are together and apart. Turned wood, turning against you.
If they had a back you might see it. No back, no back-stabbing.
We won’t mention that the sculptures look a bit like chess pieces because that’s obvious.
They are not playing games… we prefer pepper grinders Frozen in black ice.
Frozen like muscles tensed for release.
The ‘inner core’ might manifest itself as a surface.
Most people have ideas in order to inflict them on other people.
Mix, match, offset. Are you being nice? And if so, why?
Sky, sea, space … none of the above, no beyond.
‘Probably he could no longer even understand his own interior. Darkness was upon him.’ (Nest)
Shall we listen to MORE of Henry’s track …‘I make sculpture according
to the time of year … working this
way one only has oneself to blame … I have found no other
way to work except in complete privacy.’
(Thirteen months)
Three versus one and the question is raised who is going to make the next move?
‘So magnificently shaped … this great conflicting idea about what man can do in terms of darkness … shaped my whole life’
(Barbara Hep.)
(Lynn) Chad says to us: ‘I got tired of the flimsy, the fly-away … so I decided to do the reverse.’
A mood walk in black-and-white. Is negative space again the new positive?
Things are moving, but the floor’s not chequered
Tension, danger and beauty – it’s all in the room. Looming: they are bigger and heavier than you
In English conversation novels everybody is talking it’s always the same story: husbands and wives, servants and children someone always dies, everybody is presenting themselves in the best possible light while being incredibly mean to each other … of course, we should include lovers and friends in the list. Silhouettes in 3D, you in 4D. You have the feeling that these art works don’t need us. Are exhibitions better when they are empty? ‘Verrat’ looks like something spelt wrong, it’s as much about internal conflict, as what happens to be going-on, on the outside. Have I betrayed my influences enough?
what terrible brutes we are.
unheeding possible dangers,
we plunder innocent strangers.
(Cole’s badmen)

* Compiled during a conversation between Julian Göthe and Dominic
Eichler while listening to the LP ‘5 BRITISH SCULPTORS TALK’ produced by Warren Forma (Caedmon,1965). 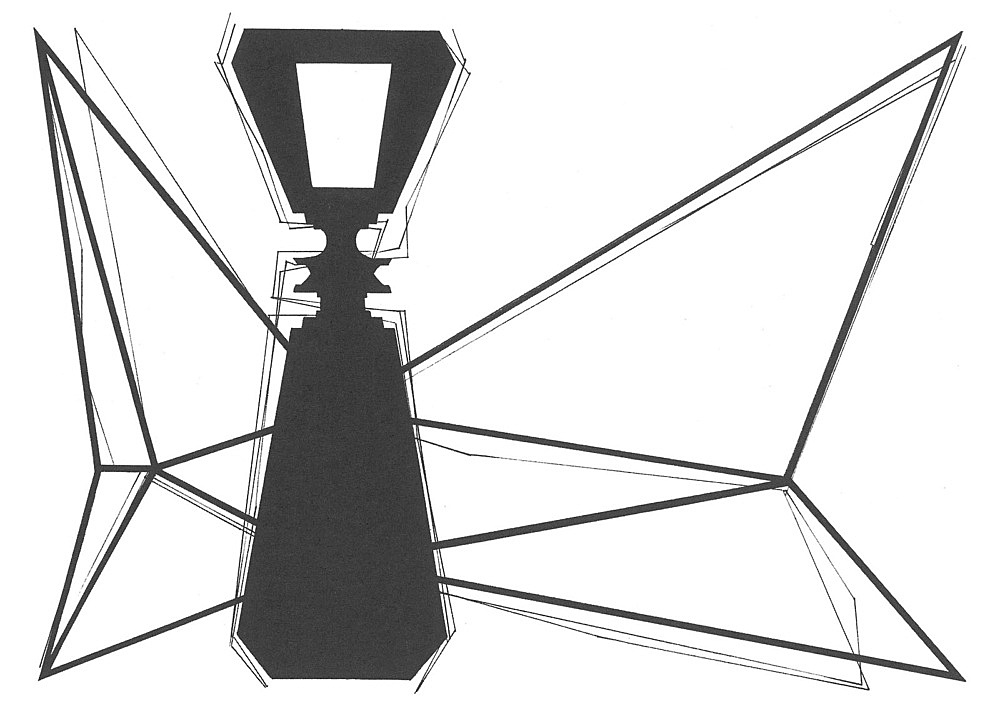 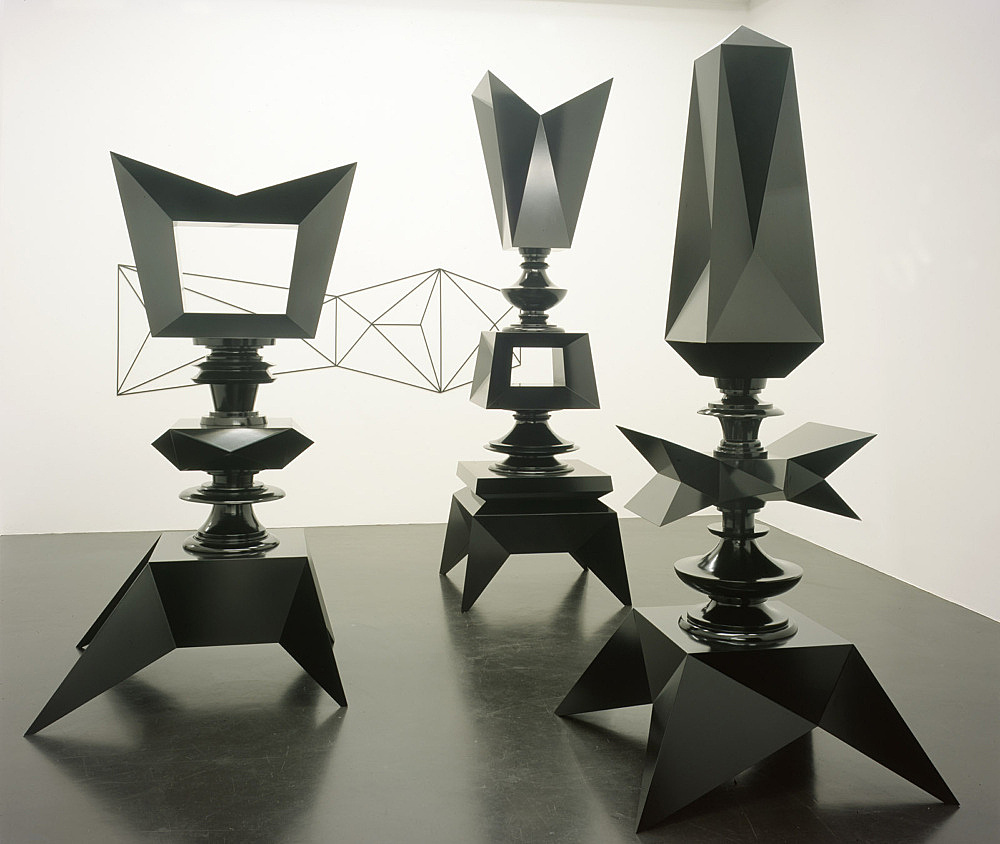 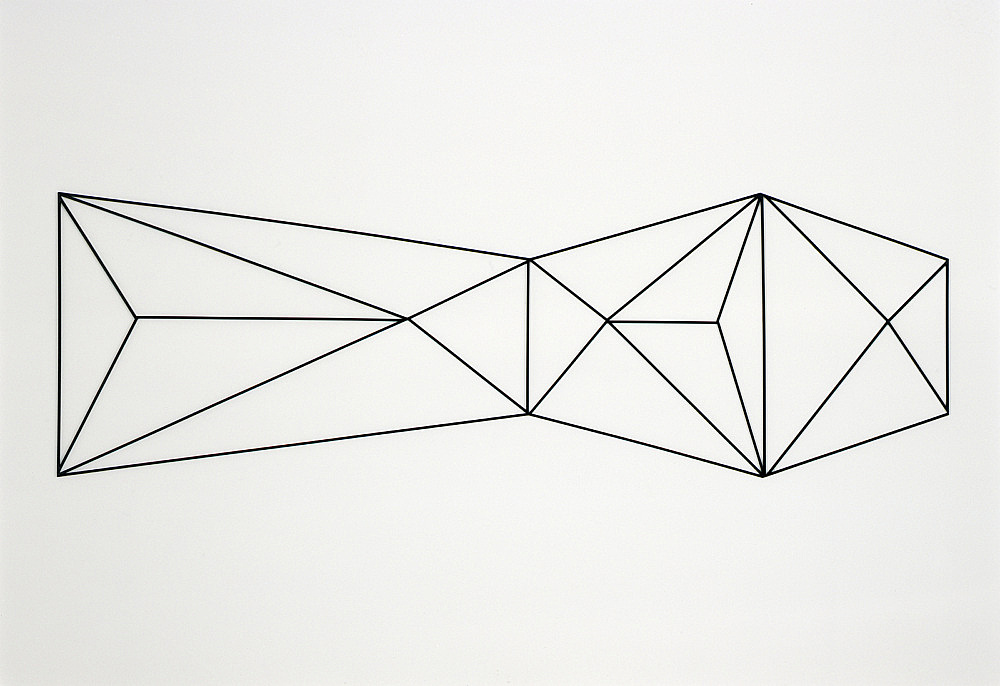 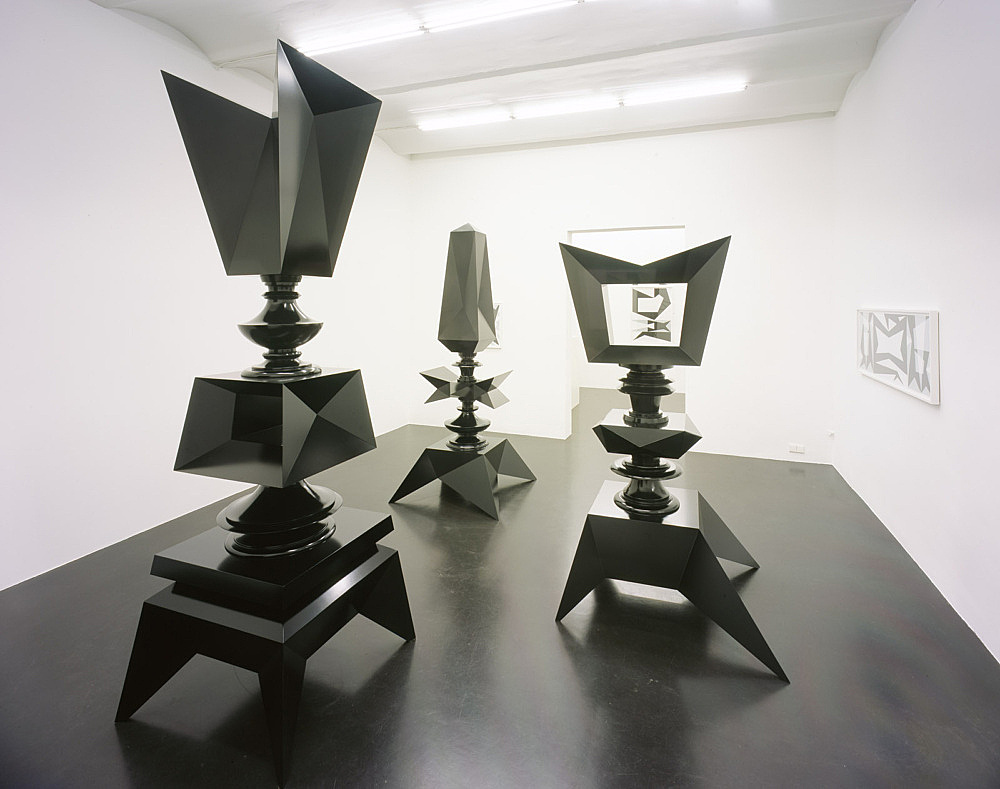 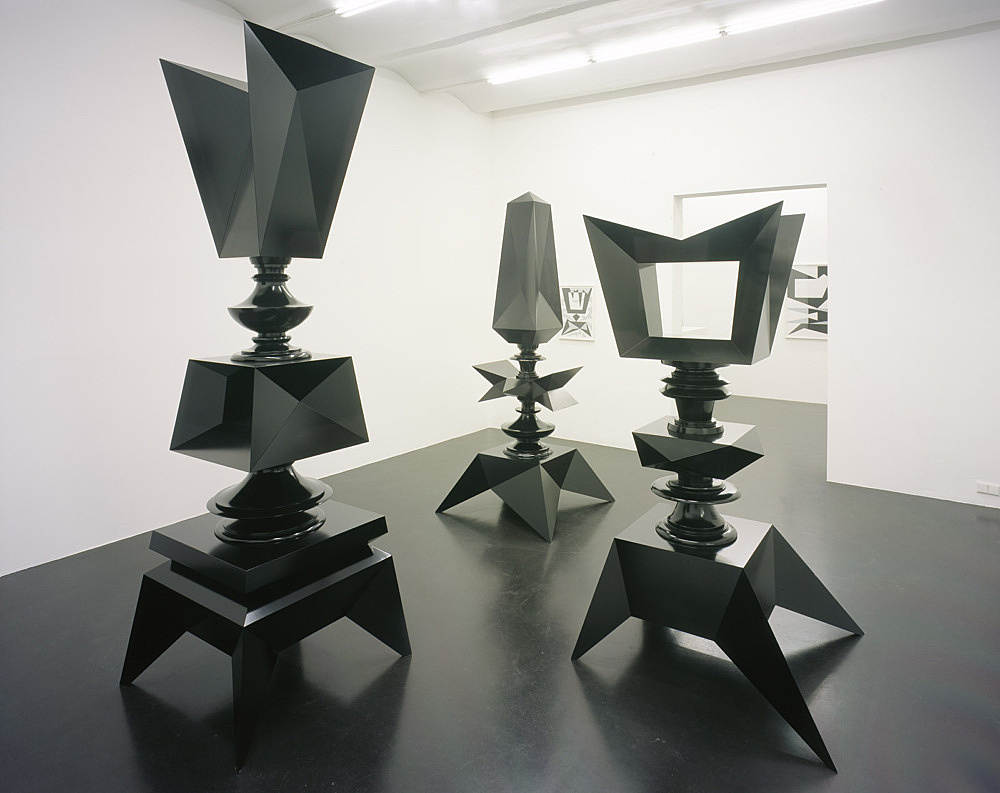 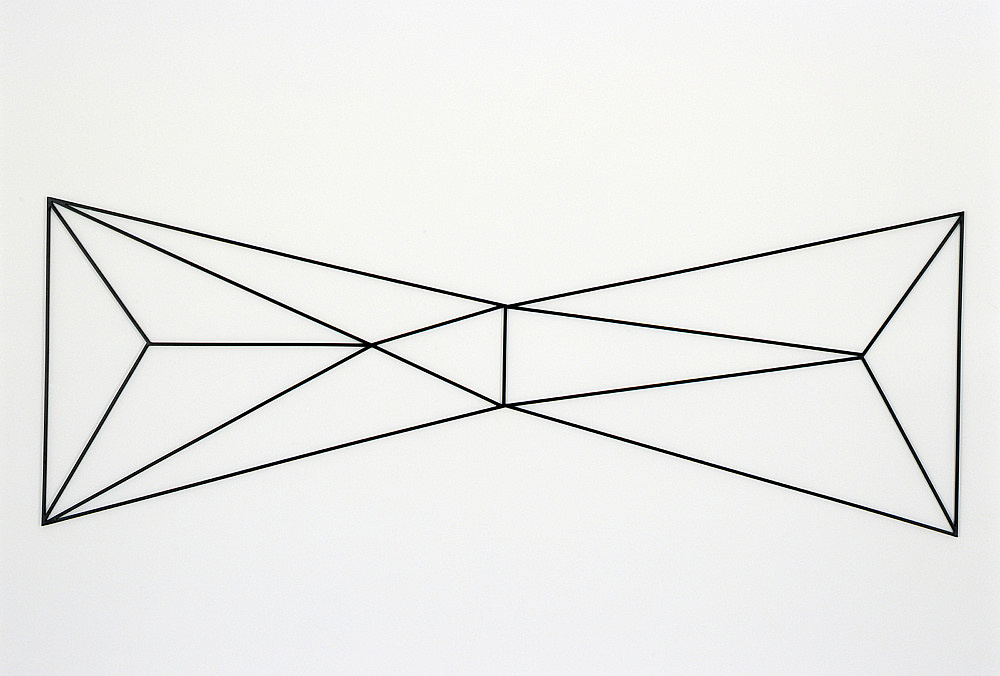 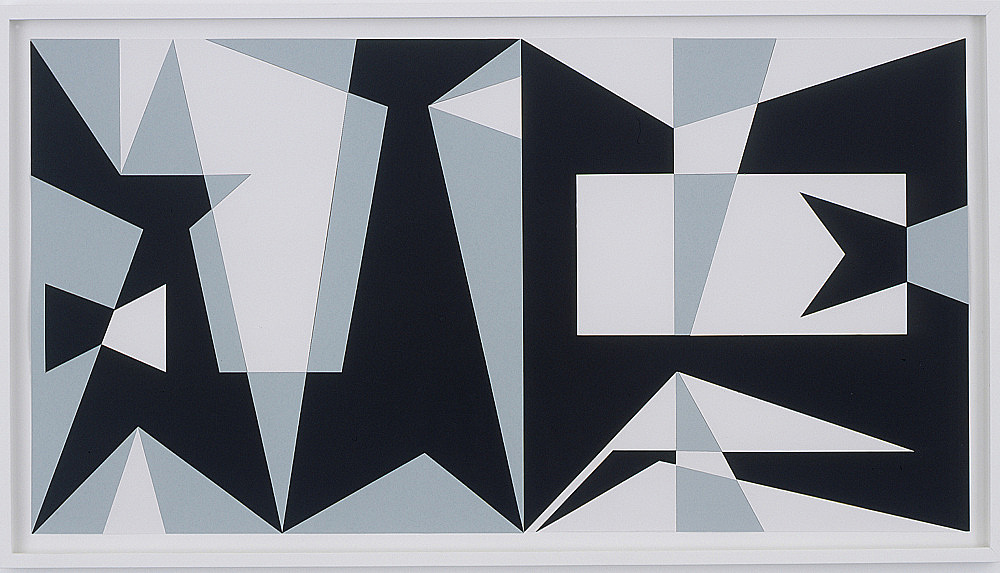 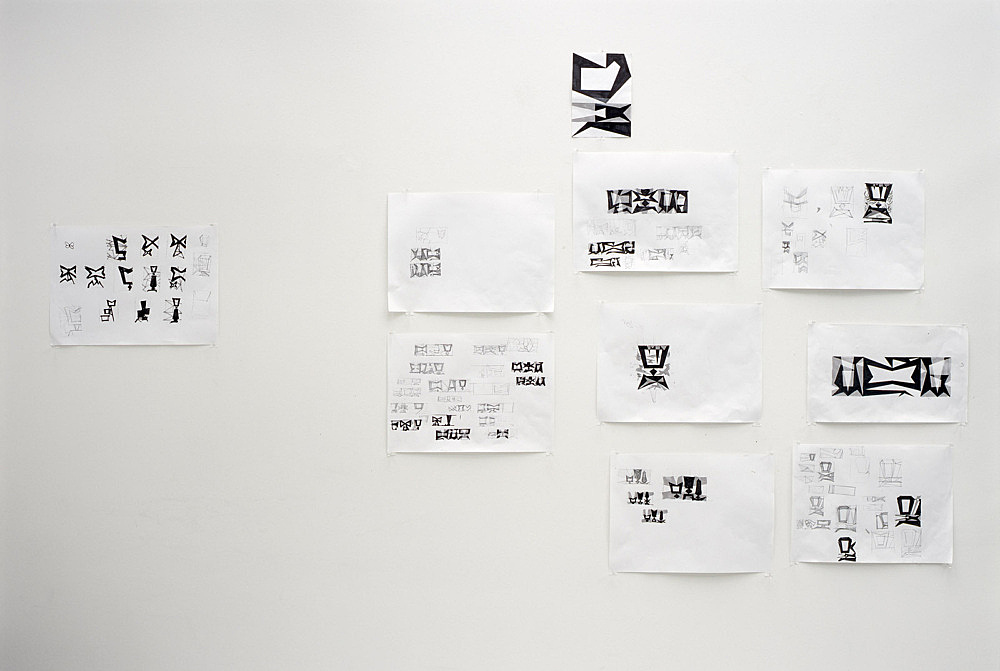