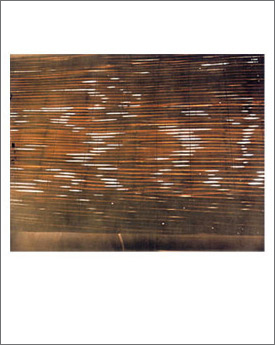 The three groups of work at Gallery Daniel Buchholz represent parallel glimses into my early dialogue with photography from 1976-86.

At the outset I rejected the dominant ideology of photography of the subject. My work and the work of my collegues in New York in the early 1980’s associated with Metro Pictures (Sherrie Levine, Richard Prince, Cindy Sherman) looked negatively at the so-called straight photography tradition coming out of Walker Evans or August Sander and their aesthetic descendents: Light Gallery in New York in the 1970’s or in the artists studying in the Dusseldorf program in Germany at the same time. We wanted to look not at the world but at the devices that make the world visible: at media, at originality and at the medium of display and presentation.

My early work, while rejecting photography as a completely objective recording device, nevertheless respected photography’s “indexical” relation to the world. By making indexes of what amounted to subjective states (of my house and studio in the Polaroids of 1976, of black drapes and pastry dough in the Untitleds of 1981, of colored light on chromogenic photographic paper in 1986) I inverted and problematized photography’s connection to the referent.

My difficulty with alot of work being done today is that it rarely considers the materiality of photography in anything other than the most superficial and spectacular way. It relys too much on optics. The lens and the camera are only a small part of what is photography. I don’t believe in cameras and I don’t believe in lenses. To say that there can be photographs which are not tied to lenses might seem absurd, but to chain photography to the camera is equally ridiculous.