Galerie Buchholz is pleased to present the group show Ritratto d’un capello inquietante at the gallery’s original location at Neven-DuMont-Straße. It will be the first time the work of Heji Shin, Nicolas Ceccaldi, Julien Ceccaldi and Mathieu Malouf is featured in the same group show in Cologne.

The title makes reference to a work by de Chirico, La Musa Inquietante (The Disquieting Muse), a 1975-1980 drawing in which a pile of objects assumes the uncanny likeness of a woman. Ritratto d’un capello inquietante literally means Portrait of a Disquieting Hair. For the artists, it serves as a vehicle through which various anxieties related to bodily and mental decay are funneled.

All three works by Julien Ceccaldi feature Stéphane, a character conceived as self-sufficient without any love interest. He was created to appear optimistic about being alone, and set upon achieving his dream of becoming a pop-punk star. In the painting Crack the World’s Shell (2019), he is depicted naked, breaking out of an egg, reaching for something high above. The composition is inspired by a Chester Brown drawing dedicated to his crush in his autobiographical graphic novel I Never Liked You (1994). It is a picture of a skeleton, symbolizing himself, floating in the cosmos and stretching his arm towards a bird that represents the girl he likes. Here, however, the hero is the bird, and his hand reaches for something out of frame.

Like the characters in the anime Utena (1996, dir. Kunihiko Ikuhara), Stéphane destroys the shell of the world, to avoid dying without ever being born. This recurrent image in the anime paraphrases a quote from Hermann Hesse’s bildungsroman Demian. “The bird fights its way out of the egg. The egg is the world. Who would be born must first destroy a world. The bird flies to God. That God’s name is Abraxas”.

Stéphane’s purpose is also to represent positive experiences of anonymous casual encounters. In the painting The Little Bird in the Pants (2019), he fishes out a small wrinkly pink bird out of a stranger’s boxers briefs. He is startled but nonetheless happy to engage with it. It is a reference to Catherine Breillat’s Romance (1999), in which Marie (Caroline Ducey) is so deeply enamoured with her boyfriend that she thinks of his flaccid penis as a weak bird that she lovingly nurses to life. The shadow of a disturbing figure appears at the door. It sports a single pubic-like hair on top of its bald head. It could be a husband walking in on an affair, or Stéphane’s future self, revisiting this memory.

The photographs by Heji Shin are based on the long history of “portrait of the artist’s mother”. Shin’s mother suffers from a psychosis that compells her to cook large quantities of food from the early morning hours until exhaustion every day, which she then packs into unmarked plastic bags to dump them as anonymous offerings in various locations across the city of Berlin – near hospitals, in front of police stations, fire stations, etc. The mother poses next to professional models and performs her habitual duties as a fictional version of herself, putting contrasting representations of the Feminine in relation to each other: the mother and the model, the artist and the child, and on a deeper level, the origins of art and the origins of life.

The pieces titled Eaux Saines (2019) by Nicolas Ceccaldi are at once ready-made floor sculptures and room dividers. Consisting of pillows arranged in a row that extends into the middle of each room, these pieces were originally conceived in an attempt to establish boundaries between two people sharing the same bed.

While these sculptures formulate a concrete, modernist solution to body contact, three paintings, A Rose for a Rogue (2018), Only a Duke Would Dare (2018) and Le Temps Retrouvé (2019), treat human embrace through the embellishment of stock images: two impasto oil paintings of youthful couples and the puzzle-piece reconstruction of a serene fishing scene between an elderly man and his grandson.

Bracketing the exhibition are Mathieu Malouf’s paintings The Enigma of the Milky Way 1 (2019) and The Enigma of the Milky Way 2 (2019). Both are based on nude photos of the artist taken by Nicolas Ceccaldi, cut up and reconstructed, suggesting multiple simultaneous perspectives and the illusion of limbs breaking through the 4th wall – a process the artist refers to as “body cubism”. The figures are depicted in a state of deep focus characteristic of the virtuoso, with eyes fixated on the viewer wherever they stand. Contrasting with the emotionally neutral faces, bodies are dramatically contorted and unload a powerful blast of raw emotion. Out of their enlarged nipples, breast milk squirts out expressively, recalling tropes of abstract expressionism and action painting, historical art forms long associated with the myth of male self-expression. Casting himself as a nude performer on canvas and allegorically positing the body as a universe in constant expansion, the artist engages in a seductive dance for a gallery audience. 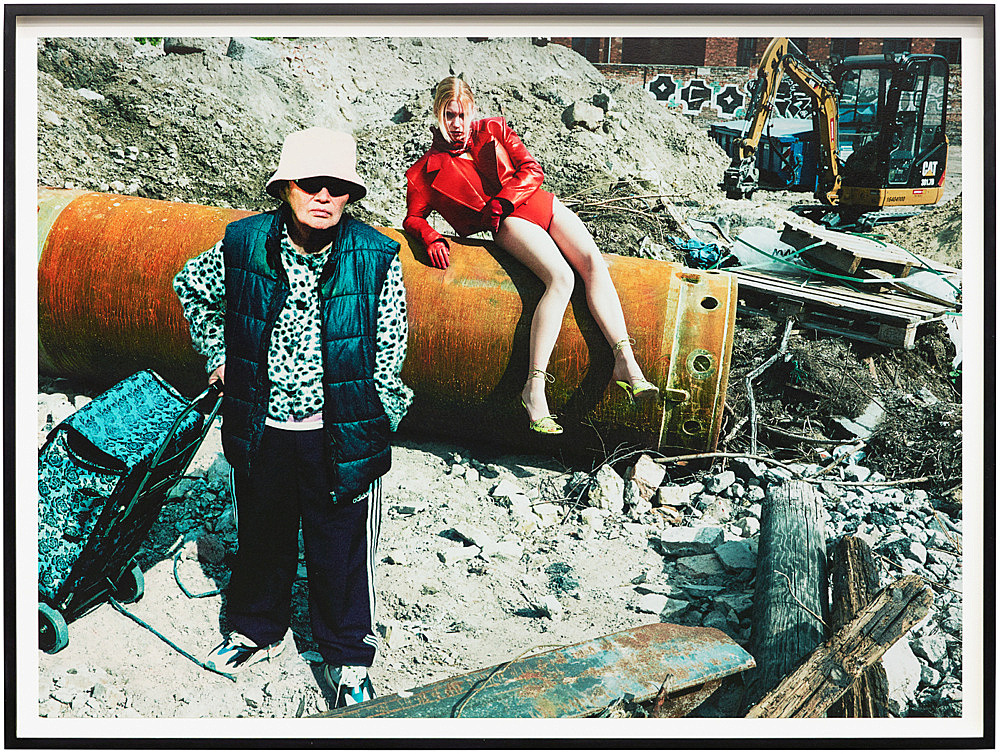 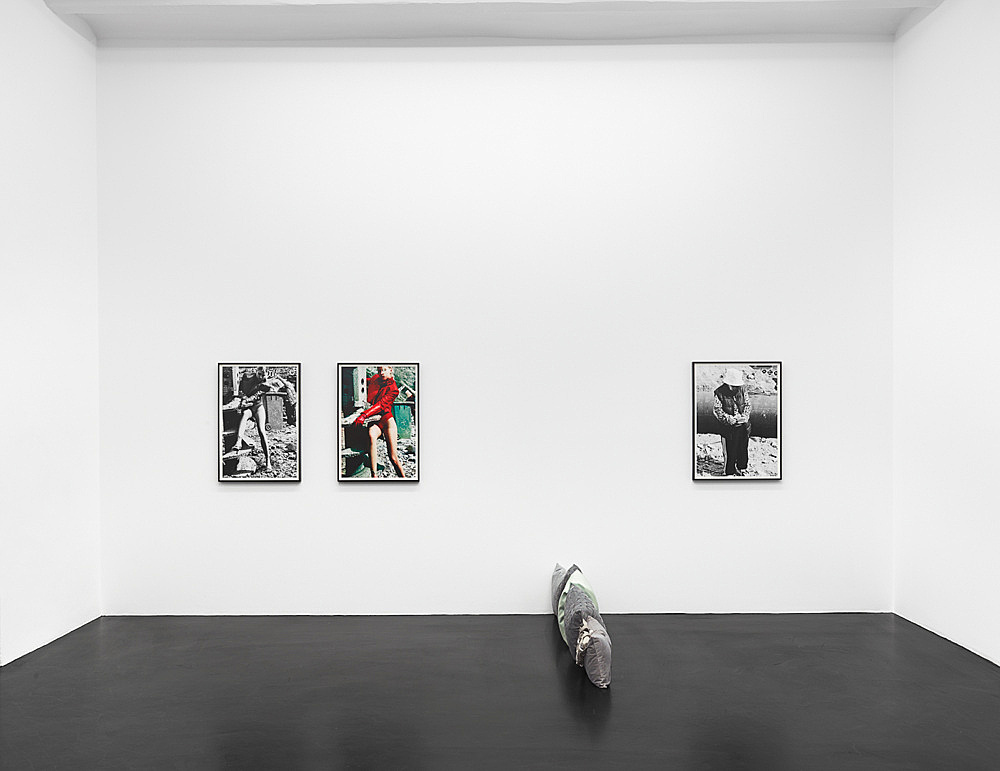 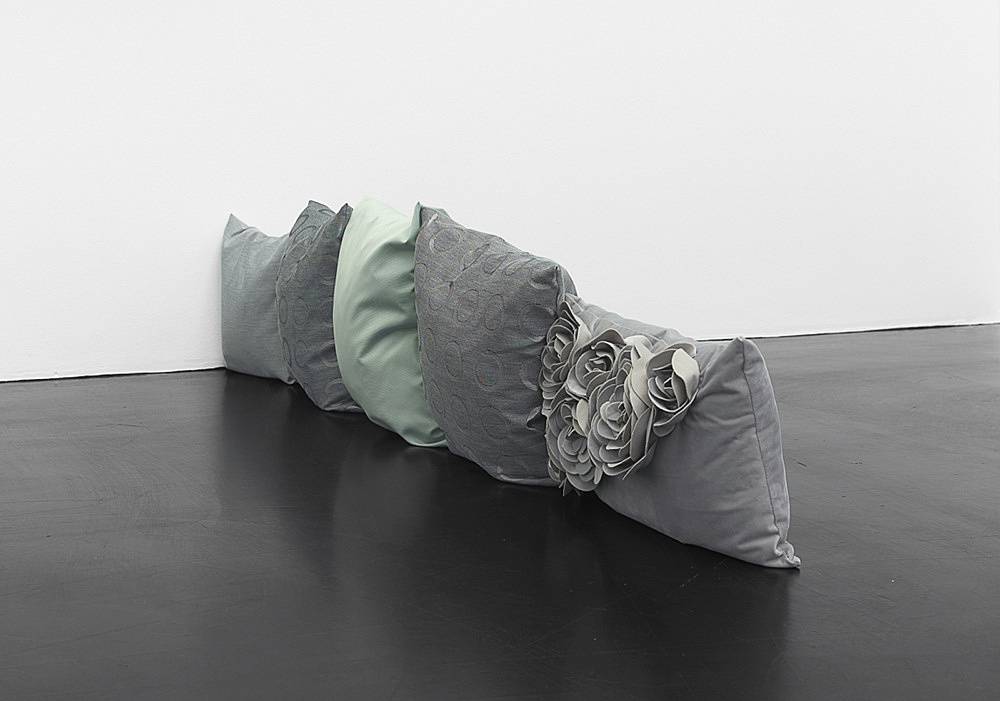 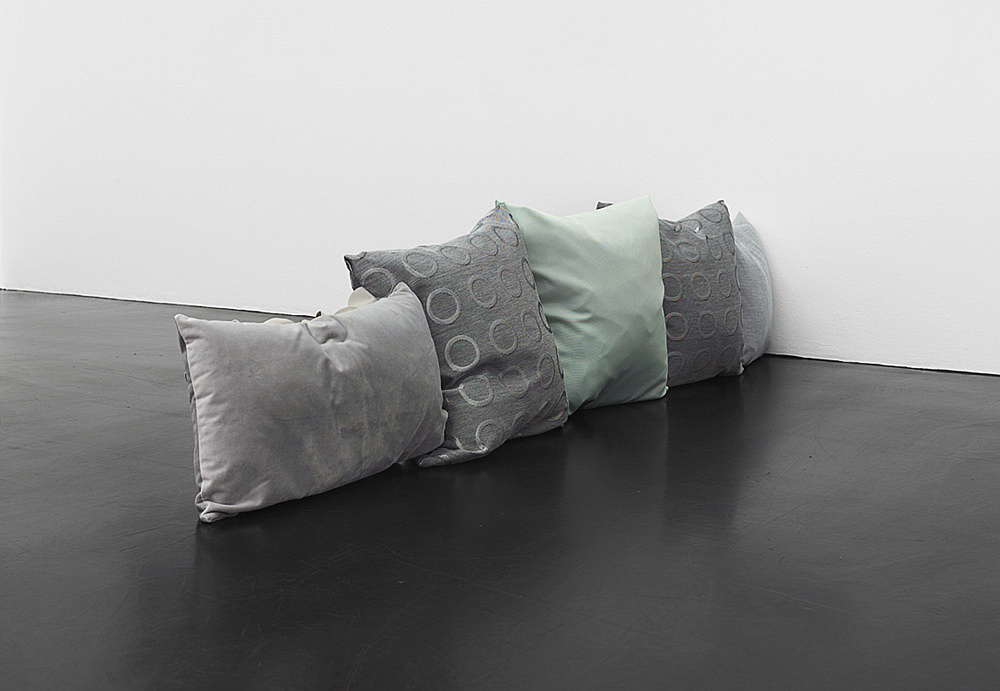 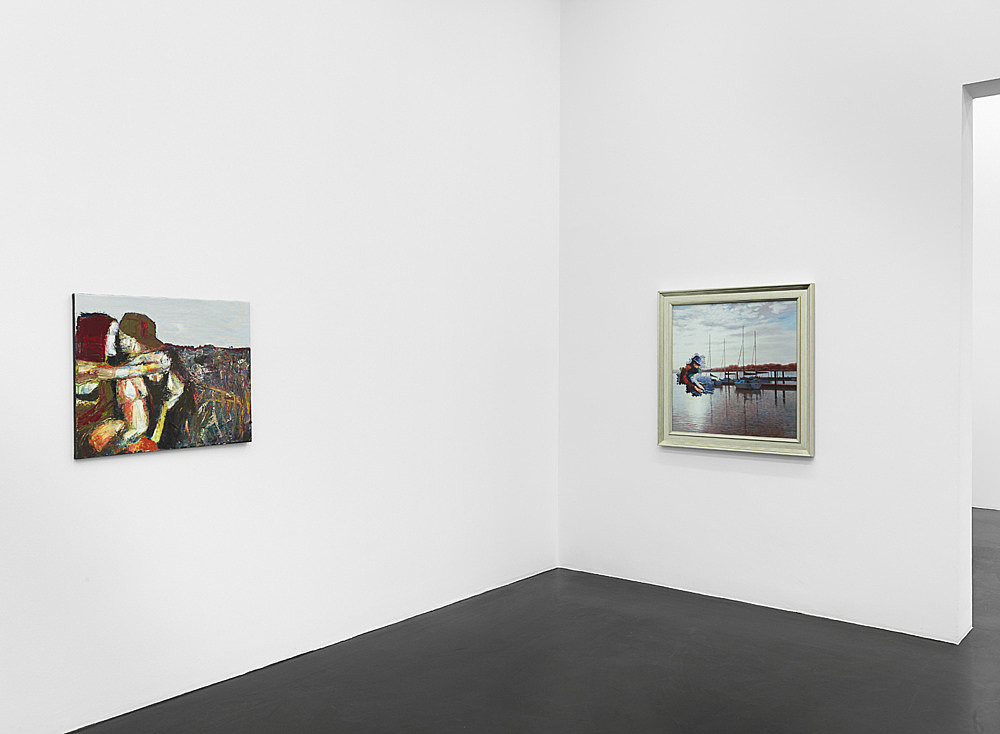 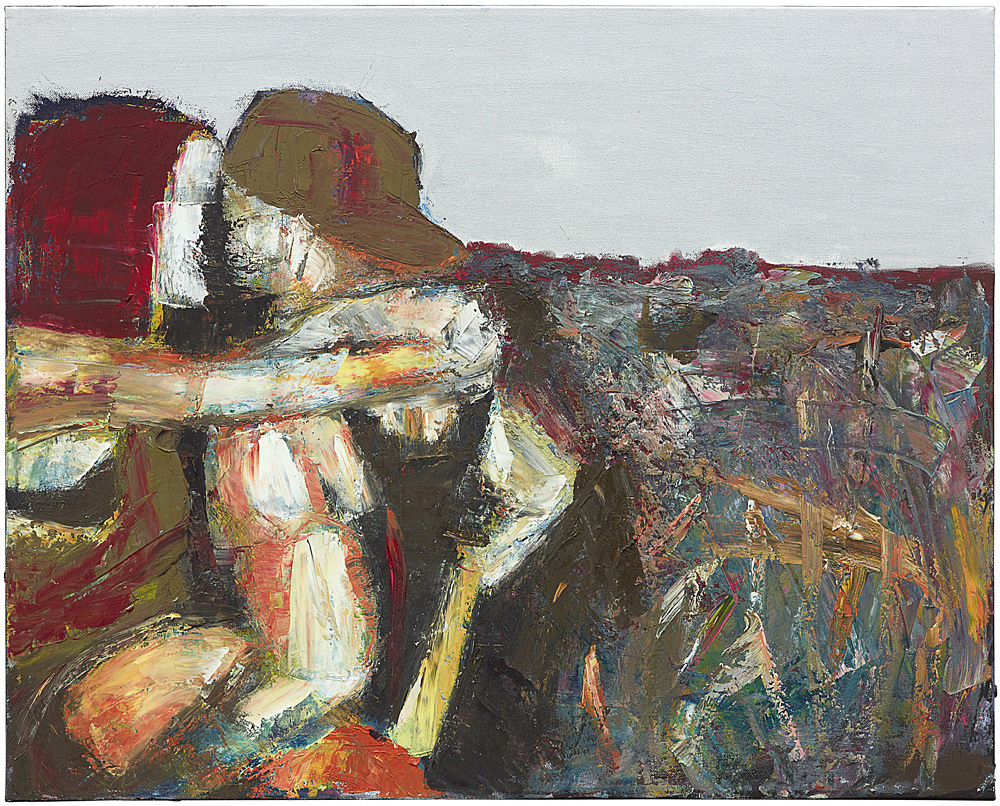 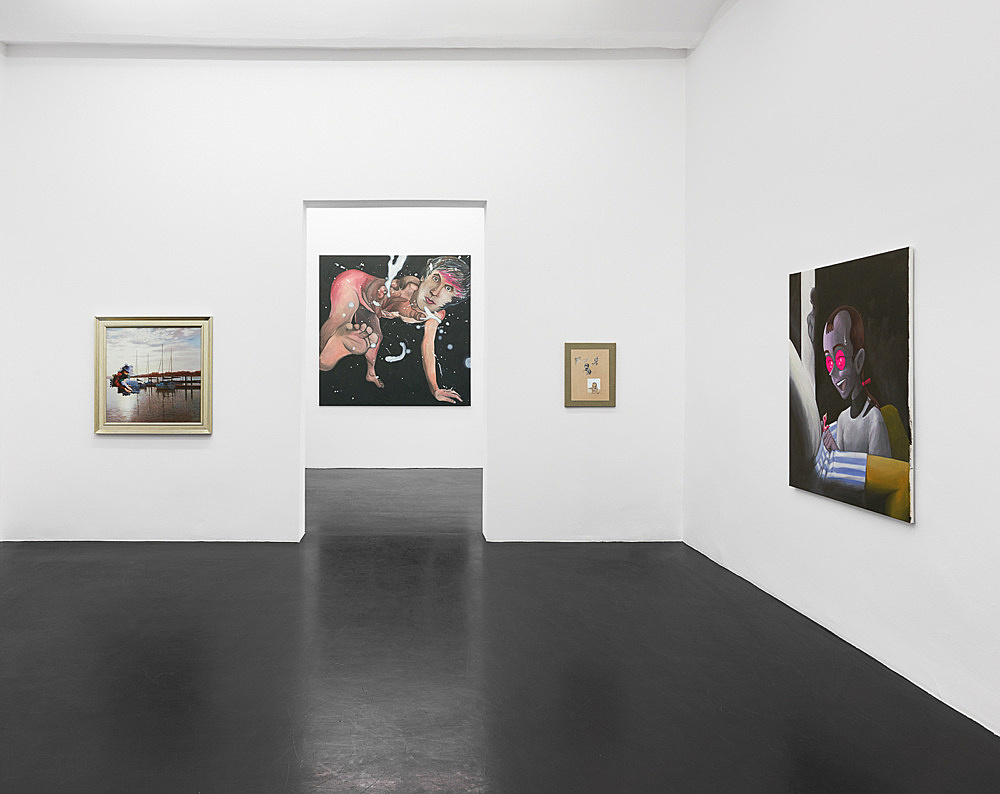 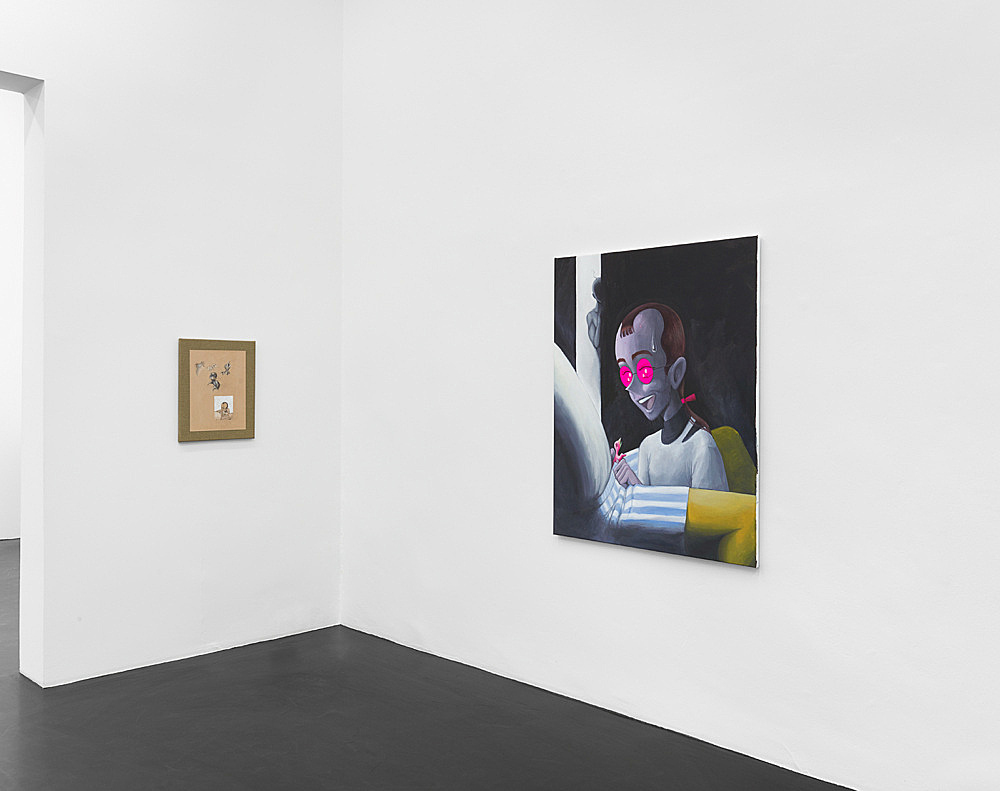 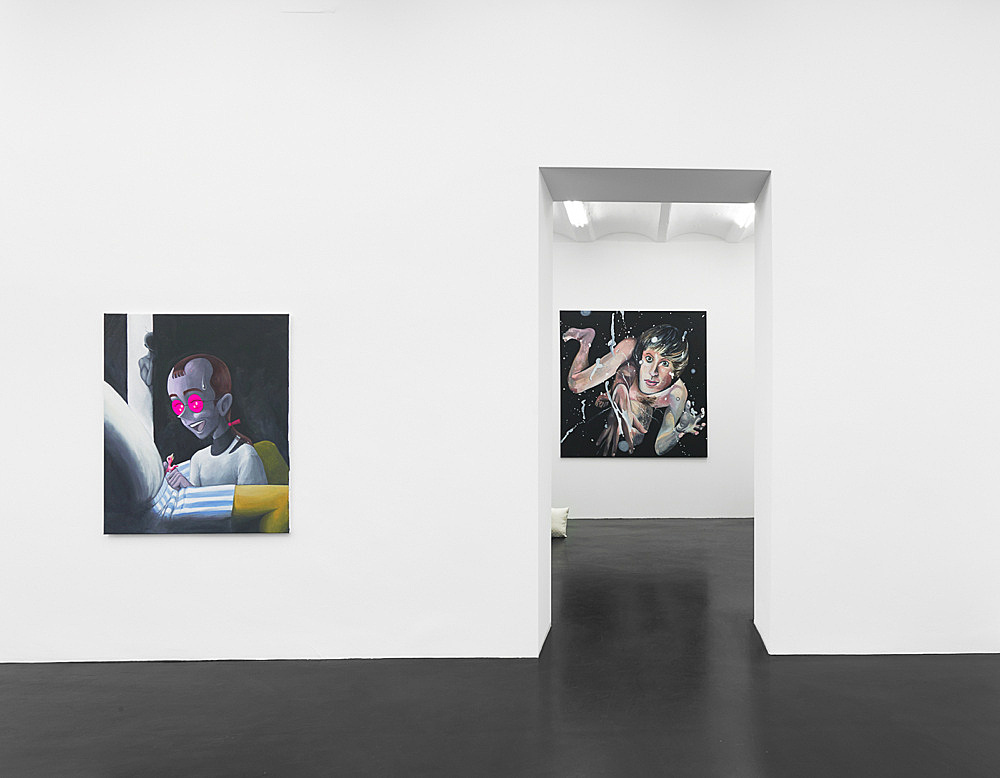 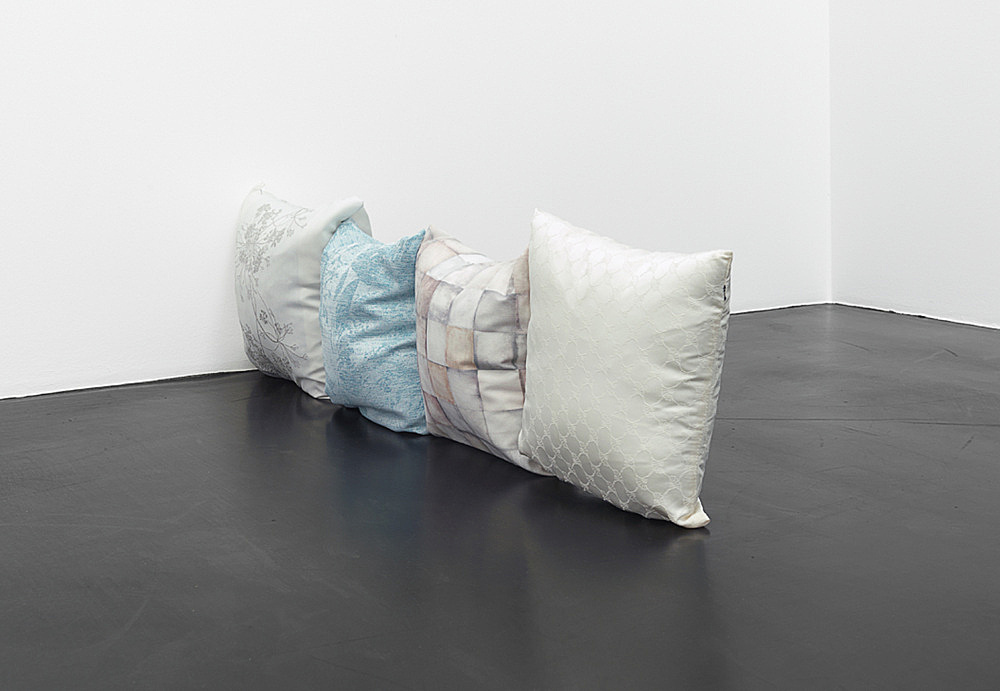 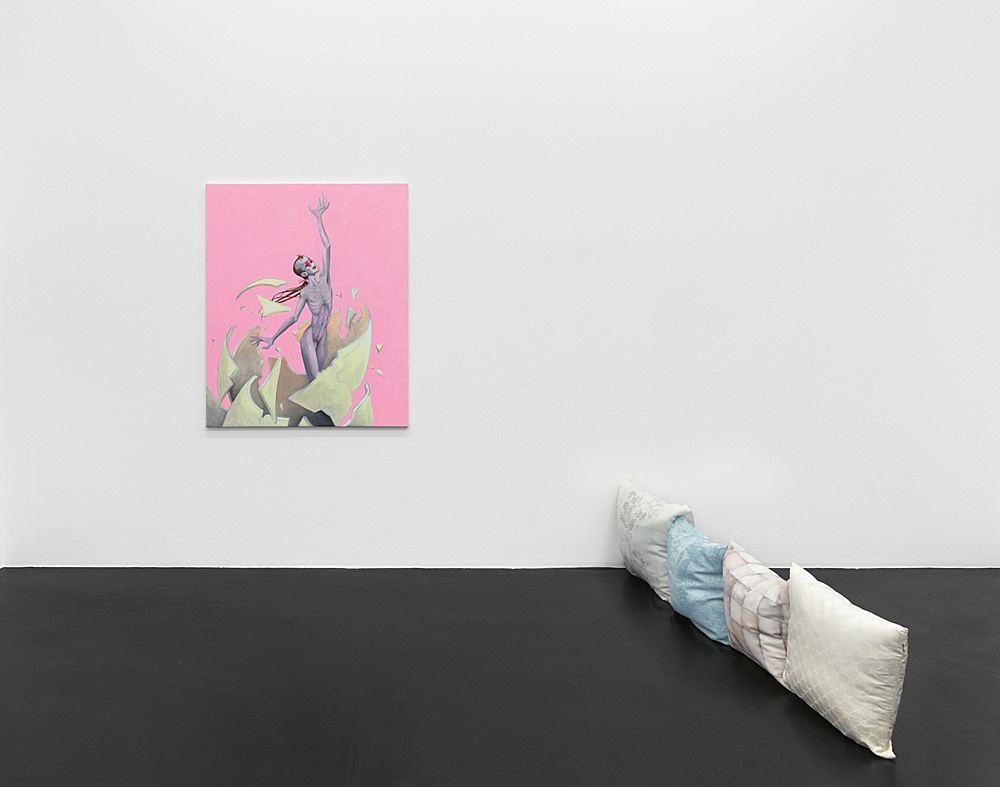 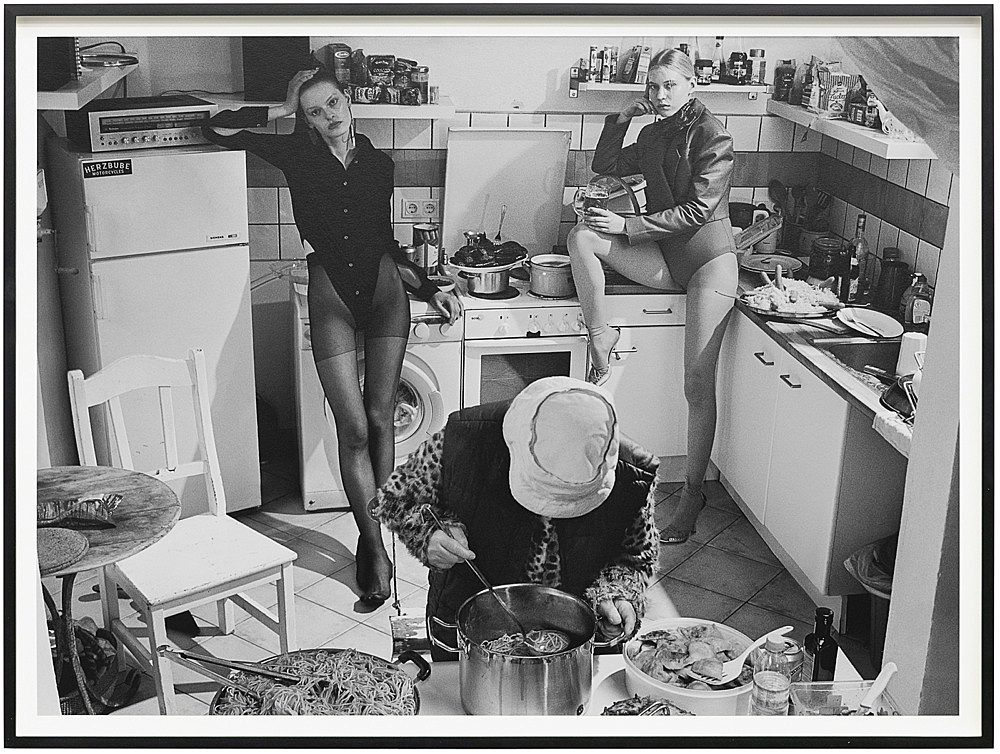 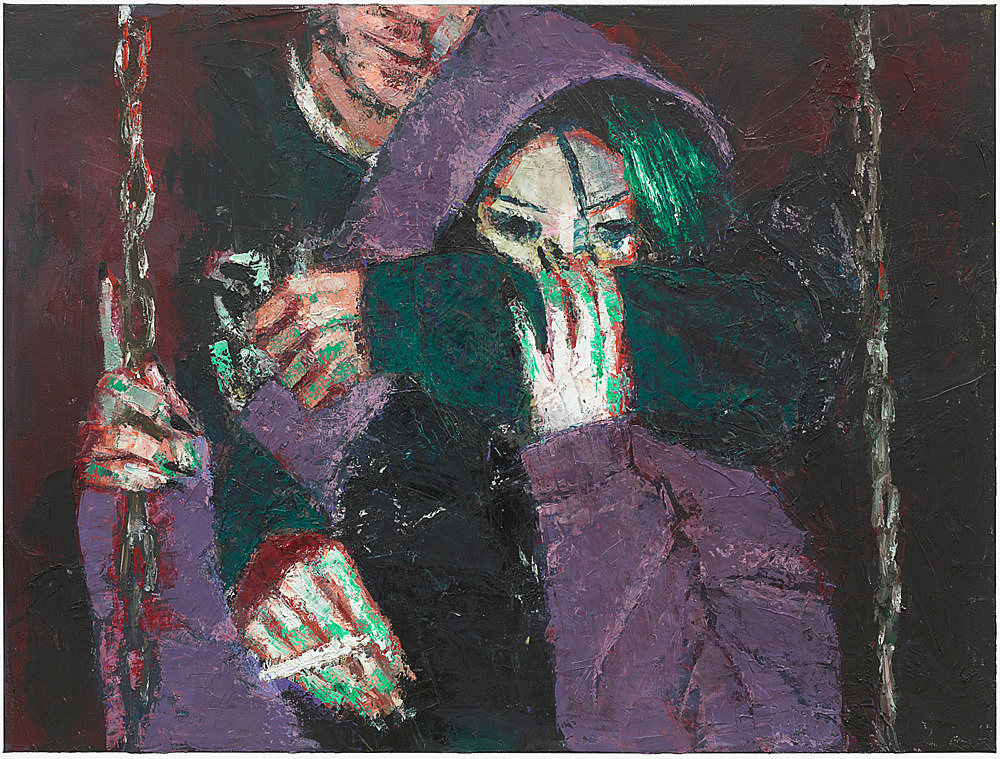