Urbis Paganus
Now let us, by a flight of imagination, suppose that Rome is not a human habitation but a psychical entity, that is to say, in which nothing that has once come into existence will have passed away and all the earlier phases of development continue to exist alongside the latest one. This would mean that in Rome the palaces of the Ceasars and the Septizonium of Septimius Severus would still be rising to their old height on the Palatine and that the castle of S. Angelo would still be carrying on its battlements the beautiful statues which graced it until the siege by the Goths, and so on. … Where the Coliseum now stands we could at the same time admire Nero’s vanished Golden House. On the Piazza of the Pantheon we should find not only the Pantheon of to-day, as it was bequeathed to us by Hadrian, but, on the same site, the original edifice erected by Agrippa… And the observer would perhaps only have to change the direction of his glance or his position in order to call up the one view or the other. – Freud, “Civilization and Its Discontents”. (NY: 1961, pp. 16-18)

A project in 5 parts, with one introductory section, a proposed index and subsets, consisting primarily of photo-collages but also including books, folios and ceramics. As follows:

(Index)
“The City of Pagans” began during a short one-month stay in Rome 2 years ago. Though the purpose of my stay was to research a lecture on Caravaggio, I quickly became distracted by the myriad classical sculptures in the Montemartini, Capitoline, Borghese and Vatican museums and soon began indulging a connection between my attraction to these and various contemporary readings I’d been doing on gender diversity.

As the project eventually organized itself into 5 interrelated sections and, as outlined above, took as a model the construction of gender through familial and substitutional acculturation, I thought it needed a title like “Urbis Paganus” to lend the allusion of a subject’s generative and reactive journey through a cityscape of seductions and determining influences. In short it’s a kind of bildungsroman where the final chapter, “The Cabinet of the Hermaphrodite”, is meant to offer an expansive opt-out of the determinism expressed in the preceding sections.

(Notes: The use of photography and collage in relation to sculpture … reproductions, doubly old, twice-distanced … accumulative, one window opens onto several more … decontemporize An old dynamic, middle-aged aesthete on a Grand Tour or Journey to the Orient and finds a mirror of his desires in either the distant past or exotic East. He Otherizes … )

Part I. Lapis Niger: Pater Paedegogyrastica: Property and Prohibition
The Lapis Niger, literally “the black stone”, is a section of paving stones at the NE corner of the Roman Forum between the Curia Julia and the Arch of Septimius Severus. In its original state it would have been distinct from the rest of the otherwise white stone grid pavement of the Forum by color as well as alignment – it was off-kilter. It pre-dates the Forum and, even by the time of the latter’s construction, its original use and purpose had been forgotten. Though rumored to be the grave of Romulus, founder of Rome, it was generally (and significantly) both preserved and avoided as a location of ill omen.

Excavations underneath the Lapis Niger uncovered a stone pillar with an inscription in a Greek so archaic that its translation is in dispute. It seems to be a marker placed by a pre-Roman king along the path of the Palatine valley to warn any future sons of the king to 1) stay off the so-marked path, 2) not defile it with any refuse and 3) stay away from any property of the king’s, including wives and daughters, otherwise, 4) you will be turned into a slave or 5) killed.

What I found interesting was that the Lapis Niger performs the dynamics of both phylogenesis and taboo: an initial command from a father, intended for his sons, threatens subjugation or death to anyone crossing the boundary into the father’s sacred property. By extension, the marker-as-law prevents incest by prohibiting interaction between sons and the father’s wives and/or daughters. Phylogenesis, an actual event occurring in a specific though long-forgotten past but relaying an affect on contemporary behavior, is illustrated by the fact that at some moment in pre-Roman history the father’s initial command went into effect, over millennia it was covered with sediment, eventually re-marked with black paving stones and, though no-one would have remembered or known its actual long-buried purpose, it was effectively still evident and, just like a taboo, the sentiment of ill omen caused Romans to both preserve and avoid it.

The term “Lapis Niger” also carries an allusion to Rome’s perhaps other famous black stone, the apparently fist-sized piece of meteorite imported from Pessinus as the incarcanation of the Magna Mater.

Part II. Magna Mater / Eros Asiaticus / Attis / syncretism
During Hannibal’s invasion of Rome in 204 CE, the Sybilline oracles prophesied that Rome’s enemies would be defeated if the Mother of All Gods were brought to Rome from her seat in Pessinus. An envoy was then sent to Phrygia to bring back to the city the sacred artifact (a fist-sized piece of anthrocite?, essentially a black stone) and cult figures of the goddess and her son Attis and was to become the primary religion of Rome until the time of Claudius and the end of the Augustan reign.

Cybele was most often represented as a multi-breasted matriarch whose role as fertility goddess was quickly abandoned for the sake of synthesizing existing Roman cults. Here eunuch priests and orgiastic rites (related to Part IV) were perhaps the last expression of the polymorphous before Christianity disbanded the perverse and marginalized concepts of Otherness into the forbidden and pagan. Under the rites of Cybele, sexuality and carnality were acts of worship.

Though the research and works in this section are not yet complete, following are a number of intended topics:

On syncretism: In reference to religion, syncretism is an attempt to reconcile disparate and even opposing beliefs and attributes of previously separate gods or practices into one, both existing simultaneously rather than. To use an example from Part III, by adding the role of Bacchus onto the cult of Antinous, neither lose integrity, rather they both gain dimension. I find also some relationship between syncresis and the aggregate aspect of collage.

On matriarchal ideologies: When pre-Christian matriarchal religions are talked about in contemporary society outside Classics and Theology departments, it is usually in the realm of the more spirit-minded strains of feminism. I would hope to steer my intentions away from Earth-goddessness and into some of the ideas I find in post-structuralism, specifically, desire-driven acts as not only a contrast to but an alternative to societal norms and patriarchal legal/legacies. 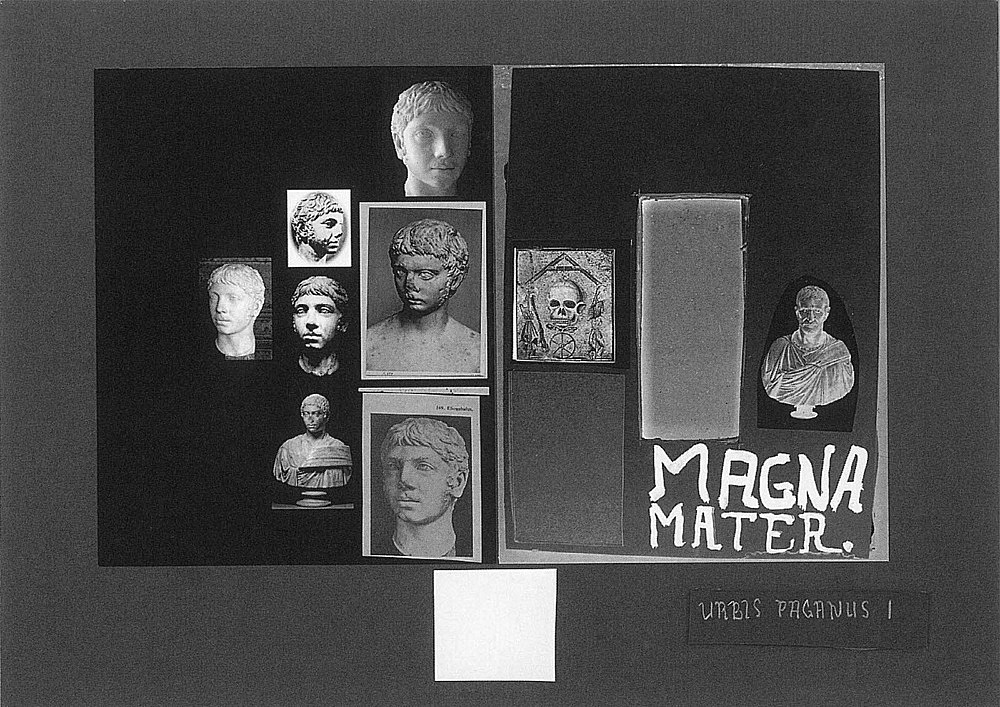 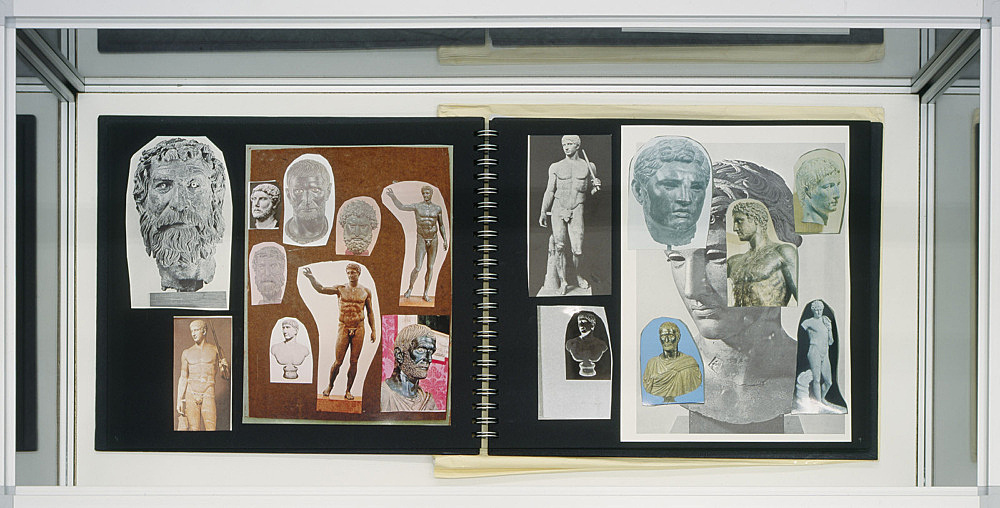 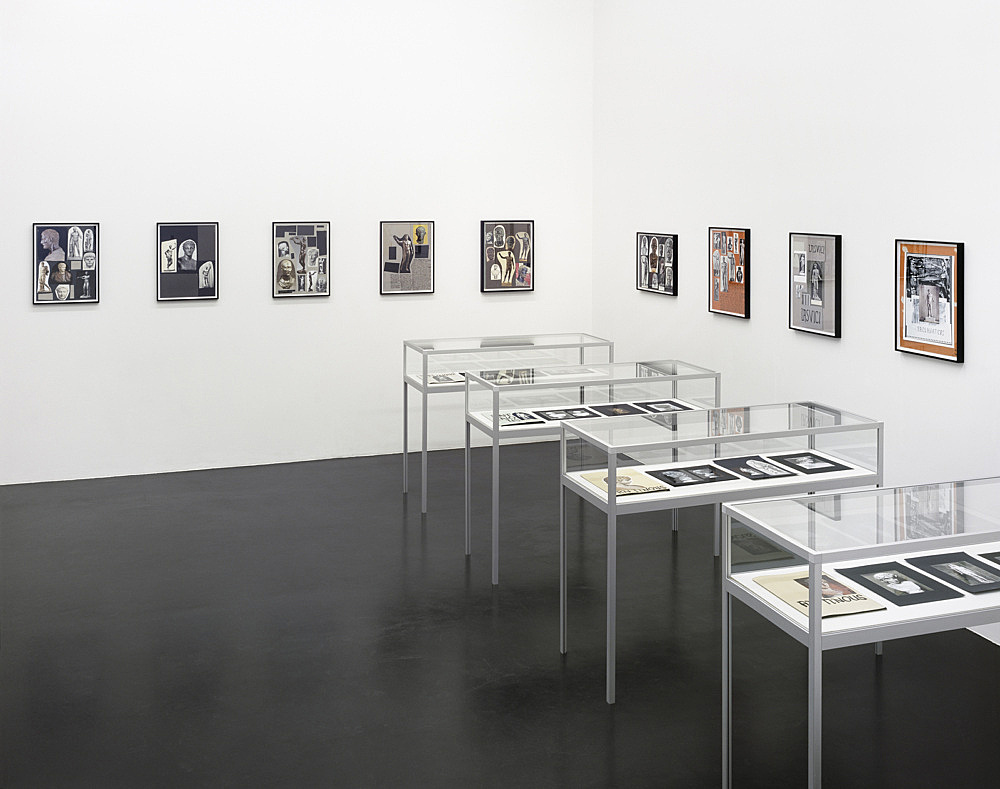 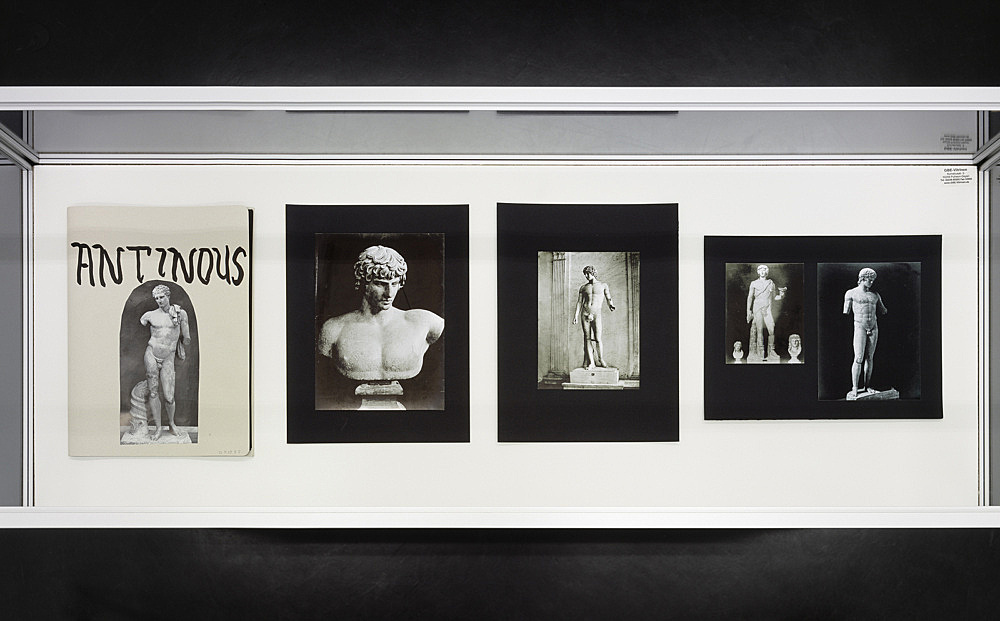 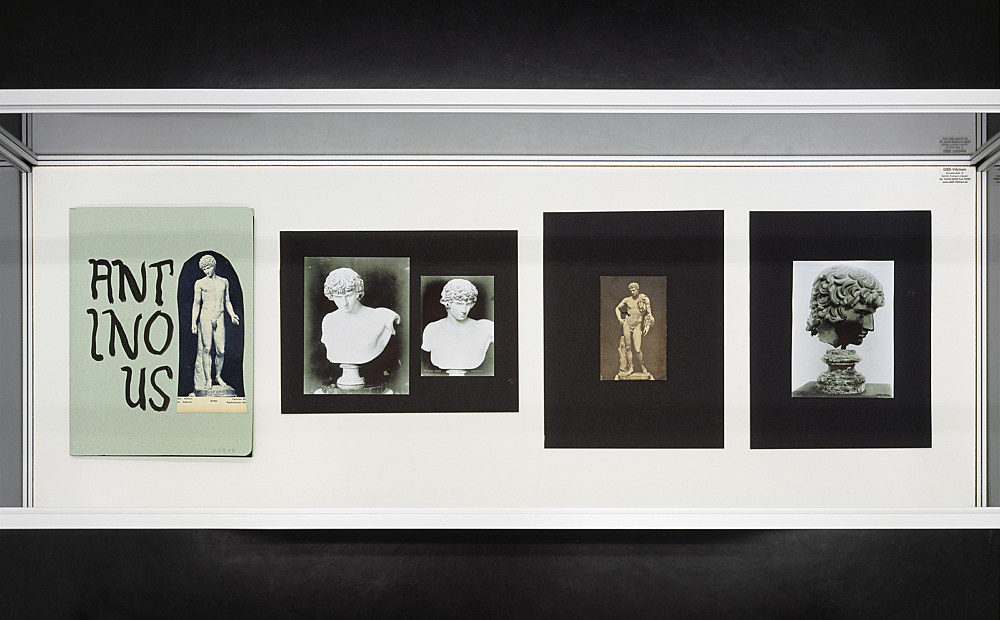 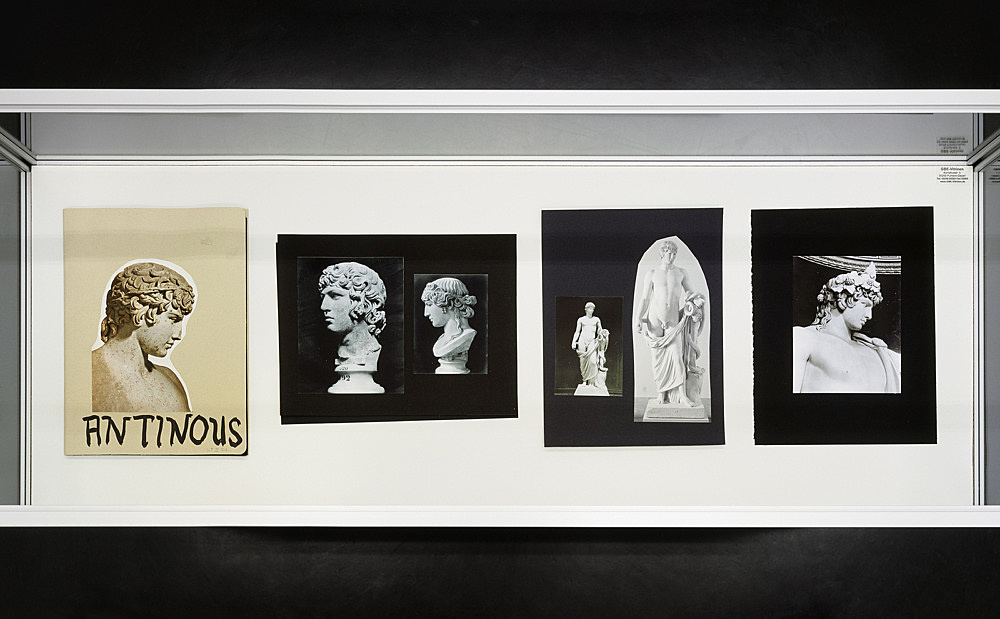 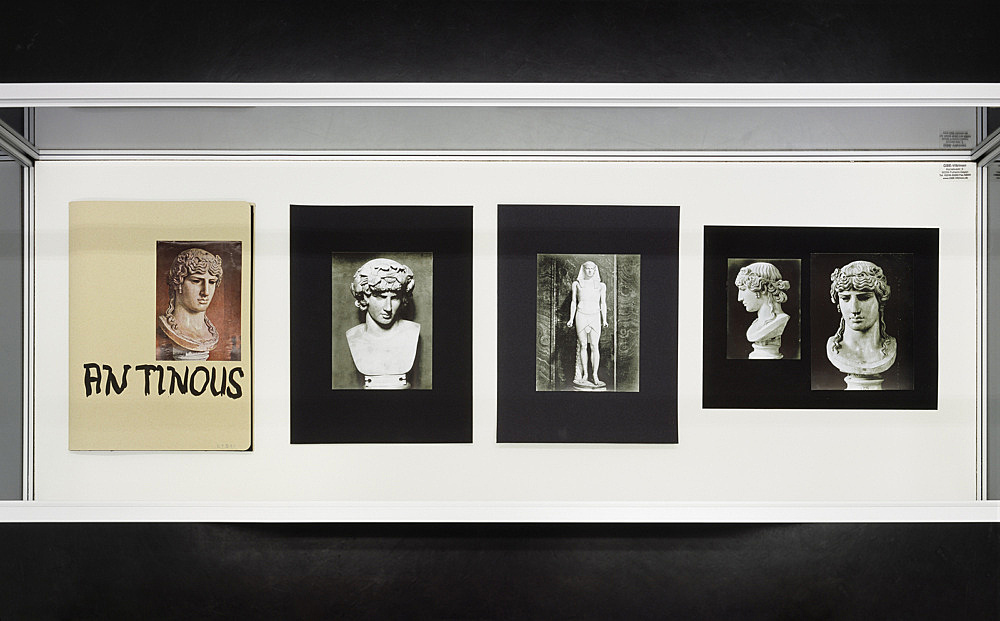 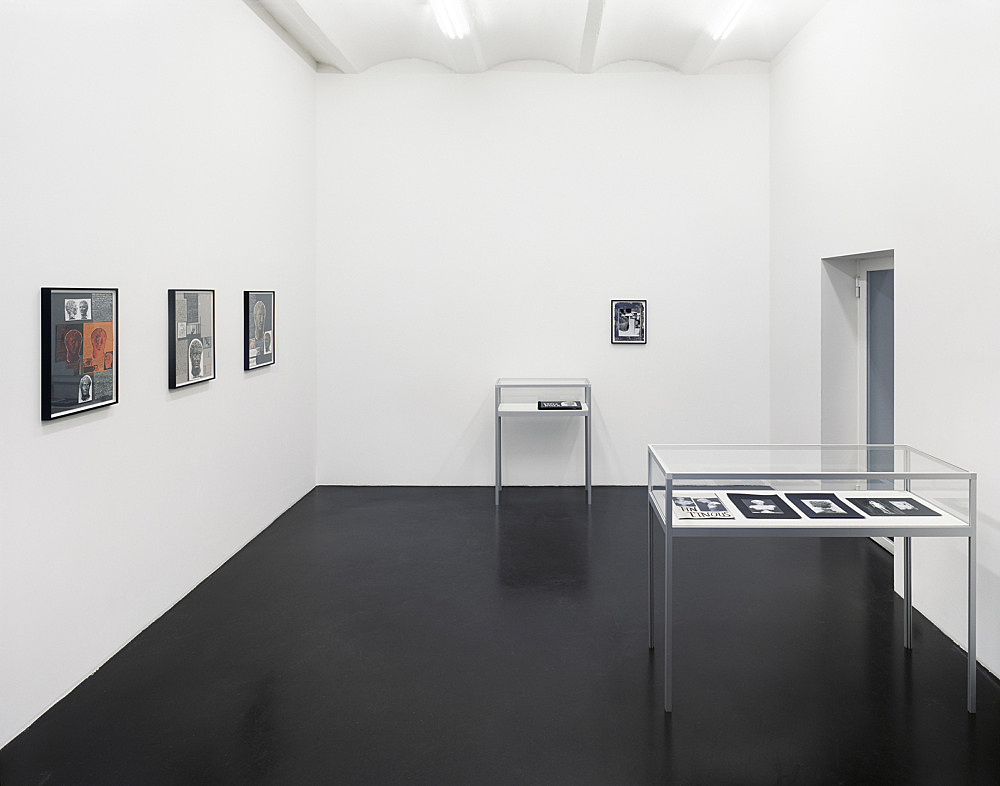 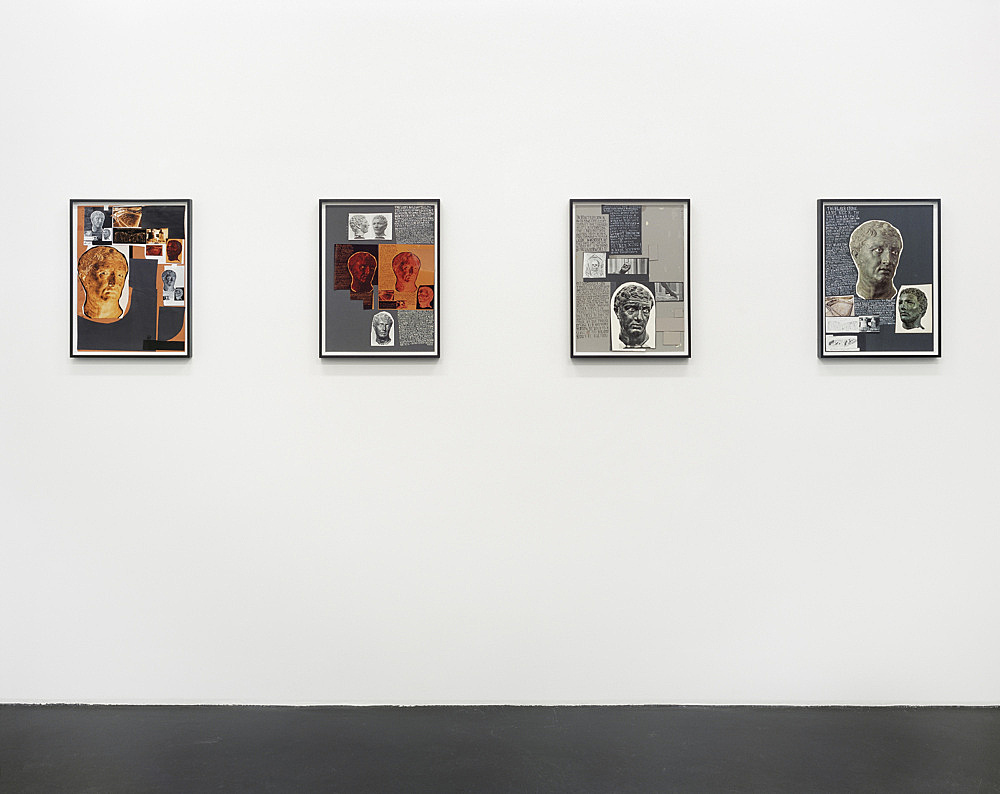 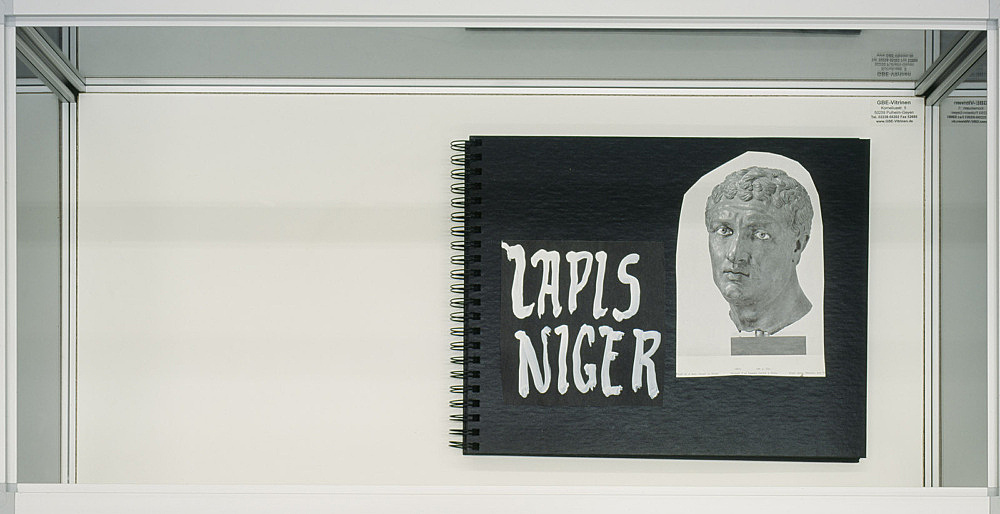 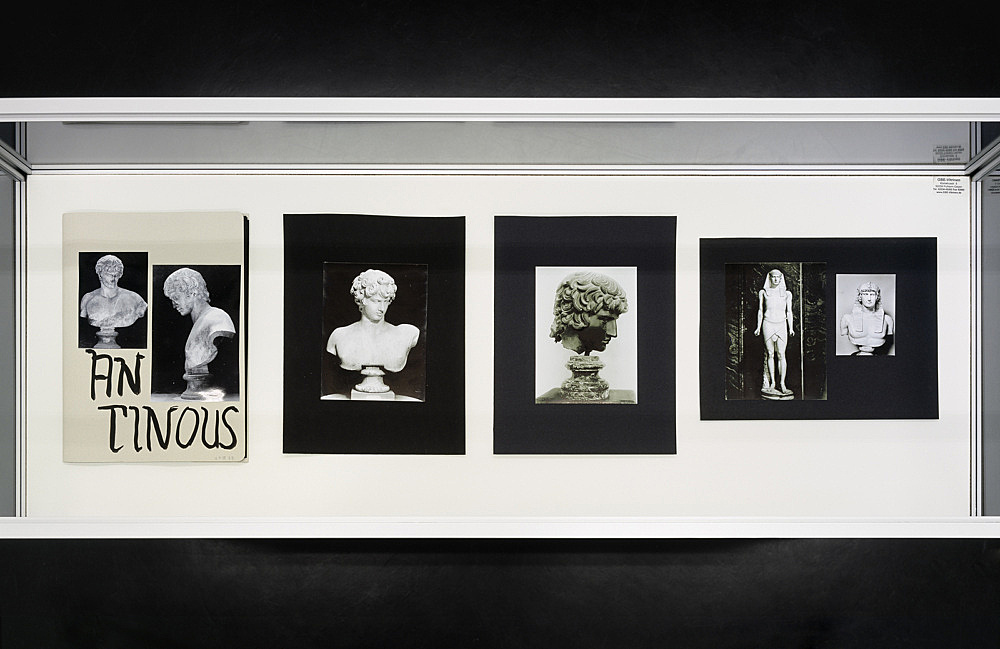